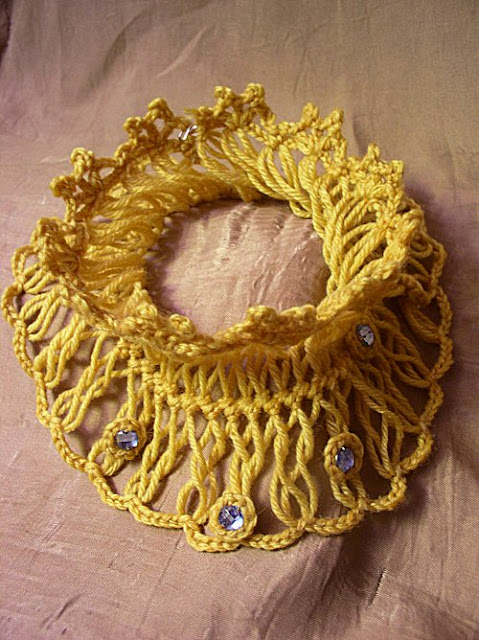 Make this intricate Hairpin Lace collar with just one ball of yarn.


Finished Measurements: The middle ribbing of the lace strip measures approximately 14 1⁄2 inches. The standard choker length for women's necklaces is 16 inches; 17-18 inches will reach the collar bone. Take your own measurements. The length of the collar depends on the number of loops you make in hairpin lace. Adjust the number of loops according to your size. 22 loops is approximately 15 inches. 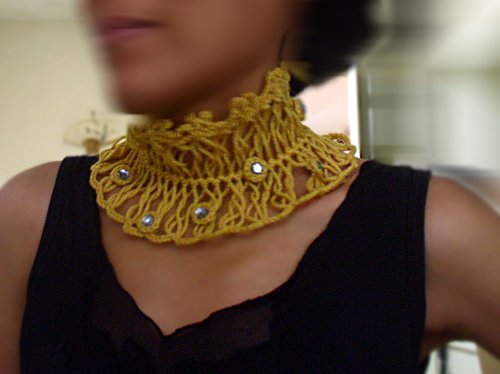 The Hairpin Lace Collar may be worn with a simple sleeveless top or a turtleneck outfit. Try making the Collar with lacy cotton thread for finer detail.

Instructions
Collar: Using yarn and 4-inch hairpin lace staple, make a strip of 22 loops on each side.

Fasten off and remove strip from staple.

Repeat as above for loops on other side but this time make ch 4 instead of 6.

Repeat this process to the last joined loop. Fasten off.

With gold thread or matching color thread, sew the plastic stones onto the center of the crochet rings to complete the buttons.

Attach one of the buttons to one end of the strip, then make a crocheted button loop at the other end.

Attaching the buttons to the strip:

Sew a button to one end of the strip and crochet a button loop at the opposite end aligned to the button.

Arrange the rest of the buttons on the strip and use pins to temporarily hold them in place. Put on the collar to see if you are happy with the arrangement, otherwise, unpin the buttons and rearrange them. When satisfied, sew the buttons in place.

Use pins to temporarily position the buttons on the strip.

On the same end of the strip where you have the button loop, attach the 's' hook in the stitch at the corner of the edging (see photo below). Use long-nose pliers to press the hook into place. This hook latches on to the edging at the opposite end of the strip and will keep the upper loops of the collar upright when you wear them. (Another style of wearing the collar may be to fold down the upper loops of the collar). 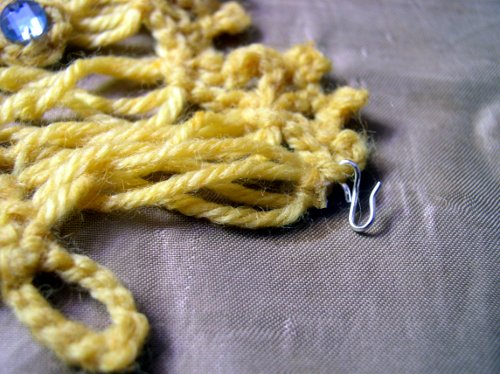 Attach the 's' hook at the corner of the lace edging. This hook latches on to the edging at the opposite end of the strip and will keep the upper loops of the necklace upright when you wear them.


Finishing: With floss thread or matching color thread, sew stitch ends to secure them. If you have fabric glue, you can use that instead to seal loose ends. Block to shape and finished measurements.

From “Priscilla Yoke Book, Crochet and Tatting” published by the Priscilla Publishing Co., 1916. (See illustration below)

To learn more about Hairpin Lace, read the chapter on Hairpin Lace in Crochet Work in the Encyclopedia of Needlework by Therese de Dillmont.